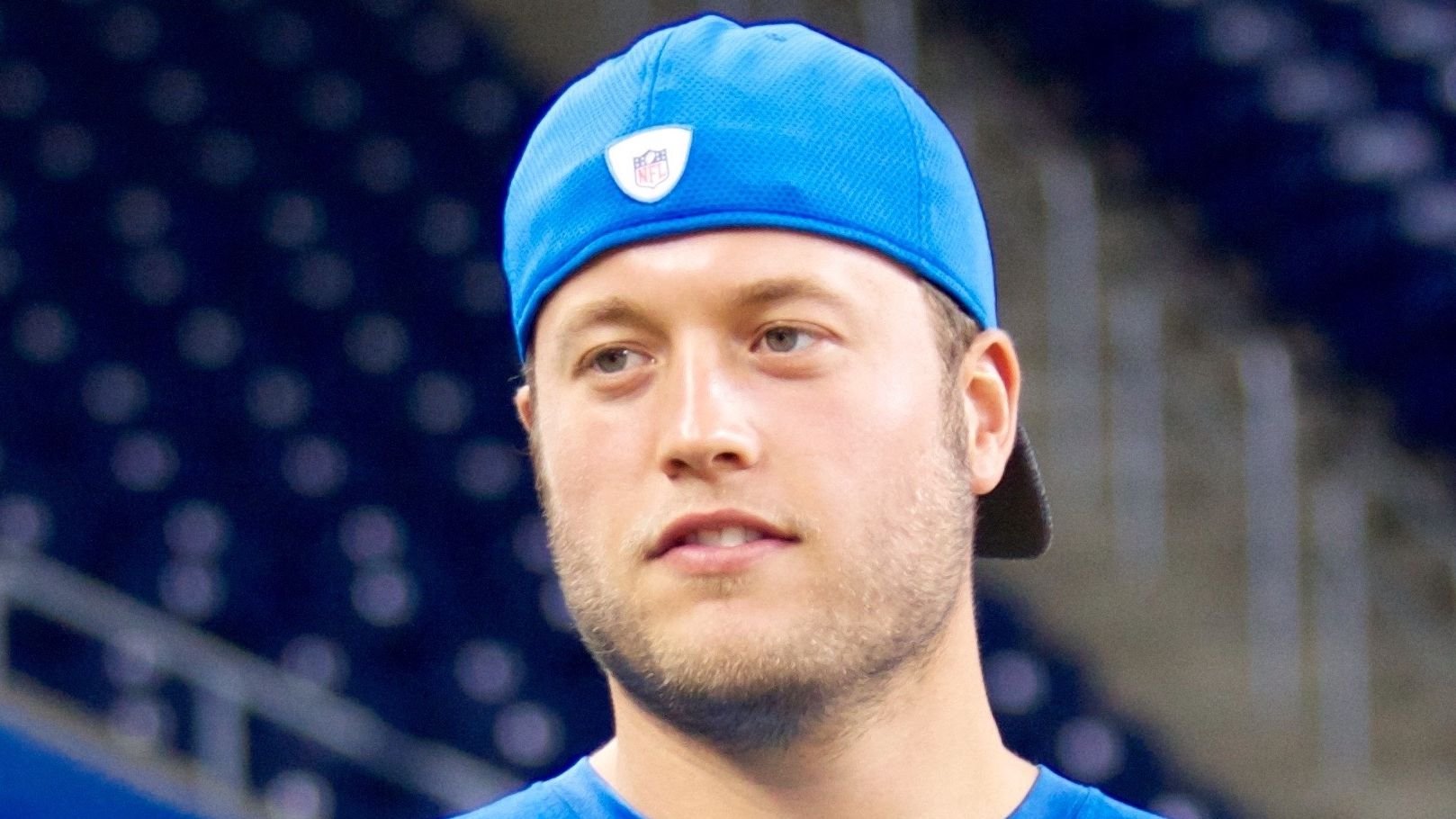 Last year, the 34-year-old NFL quarterback and his wife Kelly Stafford splashed down $19.6 million on a brand-new, ultra-modern home in the swanky Hidden Hills neighborhood of Los Angeles. Now, they have sold the property to an undisclosed buyer for $21 million, making a profit of $1.4 million in just one year, according to Dirt.

The luxurious home was the main residence of Stafford and his family before they decided to sell it, but they still own two other side-by-side properties in Hidden Hills, which they bought in April from Drake. Their famous neighbors in the area include Stafford’s coach Sean McVay, his teammate Aaron Donald and Kylie Jenner.

Keep scrolling for the photos.

Mansion On Top Of A Ridge

Sitting on two acres of land, the two-story mansion, which looks like an ultra-modern glass and shingle farmhouse with gabled roofs, has six bedrooms and nine bathrooms spanning 15,000 square feet. It is located on a ridge with amazing canyon views that are also visible from the interiors, thanks to the floor-to-ceiling glass windows.

Behind the house are a pool and an expansive lawn. According to the website of 64North, the architecture firm that designed it, the garden has a basketball court and enough space for sizable gatherings as well. There’s also a garage that can fit 12 cars – it has room for six as well as lifts that can accommodate six more. 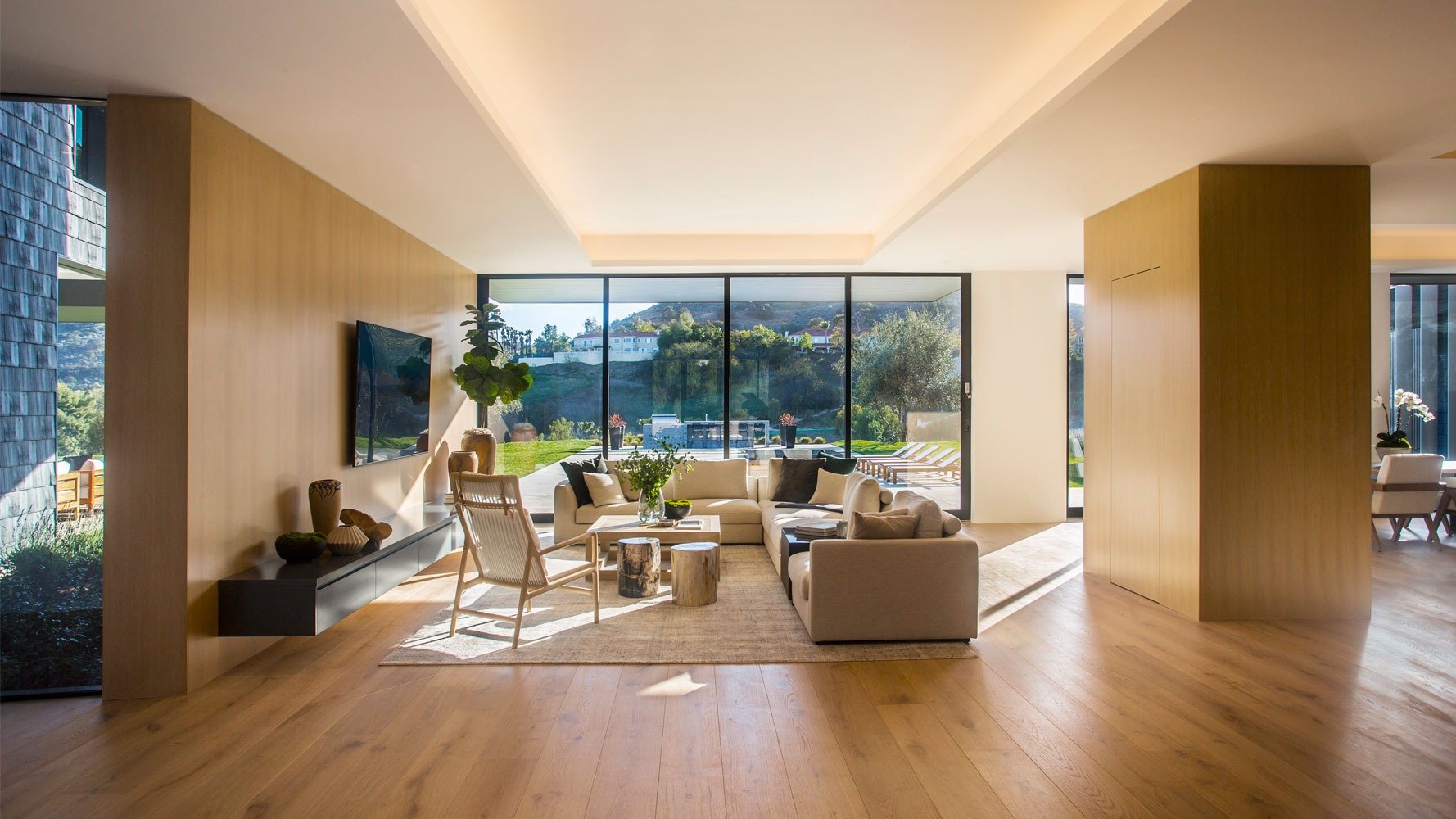 Upon entering the front door, you’ll see a double-height foyer with a beautiful spiral staircase on one side and a view extending from the great room and pool area at the back. Walls of glass let a lot of natural light in, along with the expansive canyon views.

Adjacent to the living room is the dining area, which also has beautiful views of the outdoors. The open-plan room includes a huge kitchen as well (more on that below). 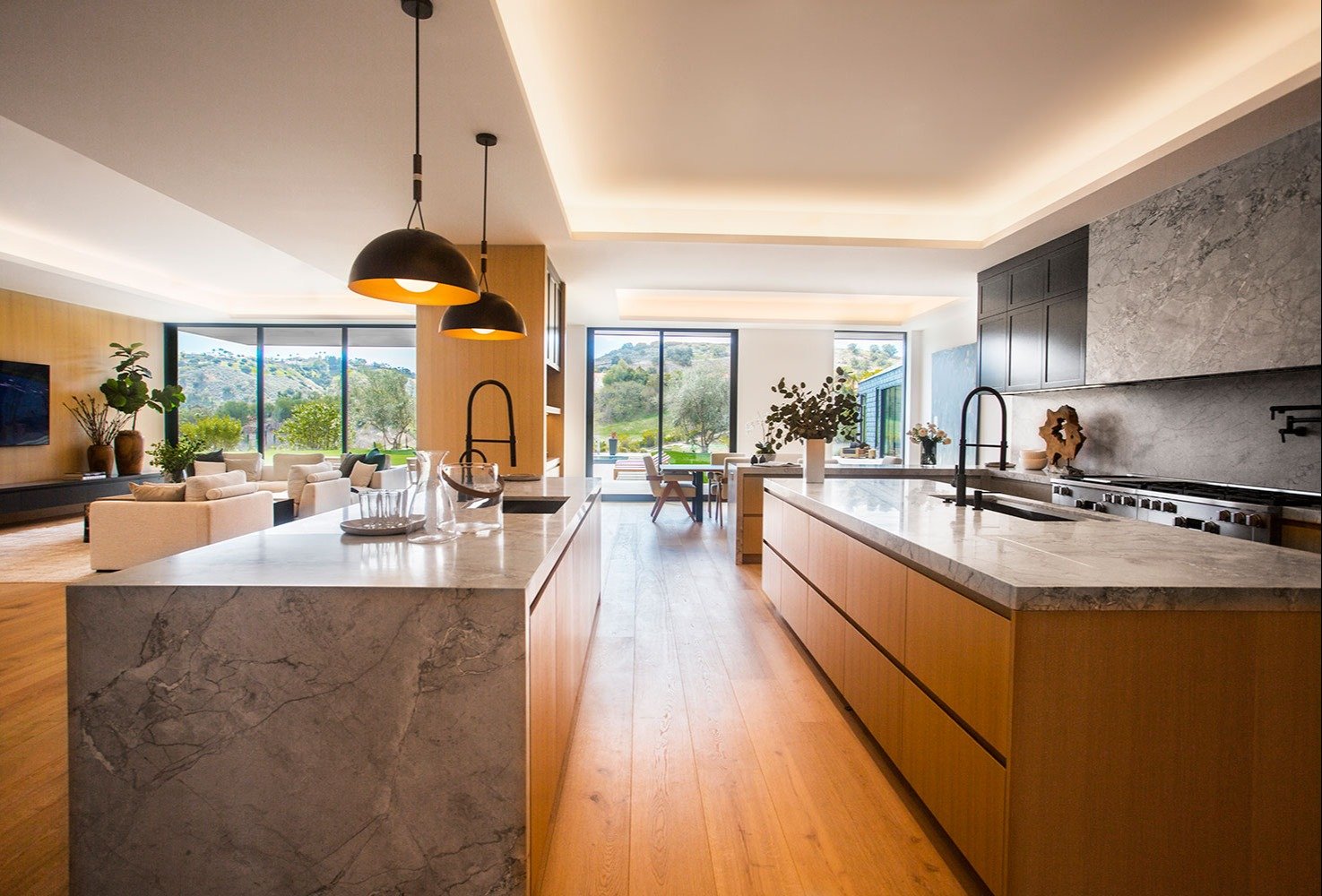 Next to the dining and living rooms is the gourmet kitchen, which boasts not one but two marble-topped islands, high-end appliances and fixtures, and a sleek and modern design echoing the rest of the house’s aesthetic.

There’s an outdoor kitchen as well, along with a dining terrace by the pool. On the north side of the property, there’s a separate guest house next to the garage and pool area. 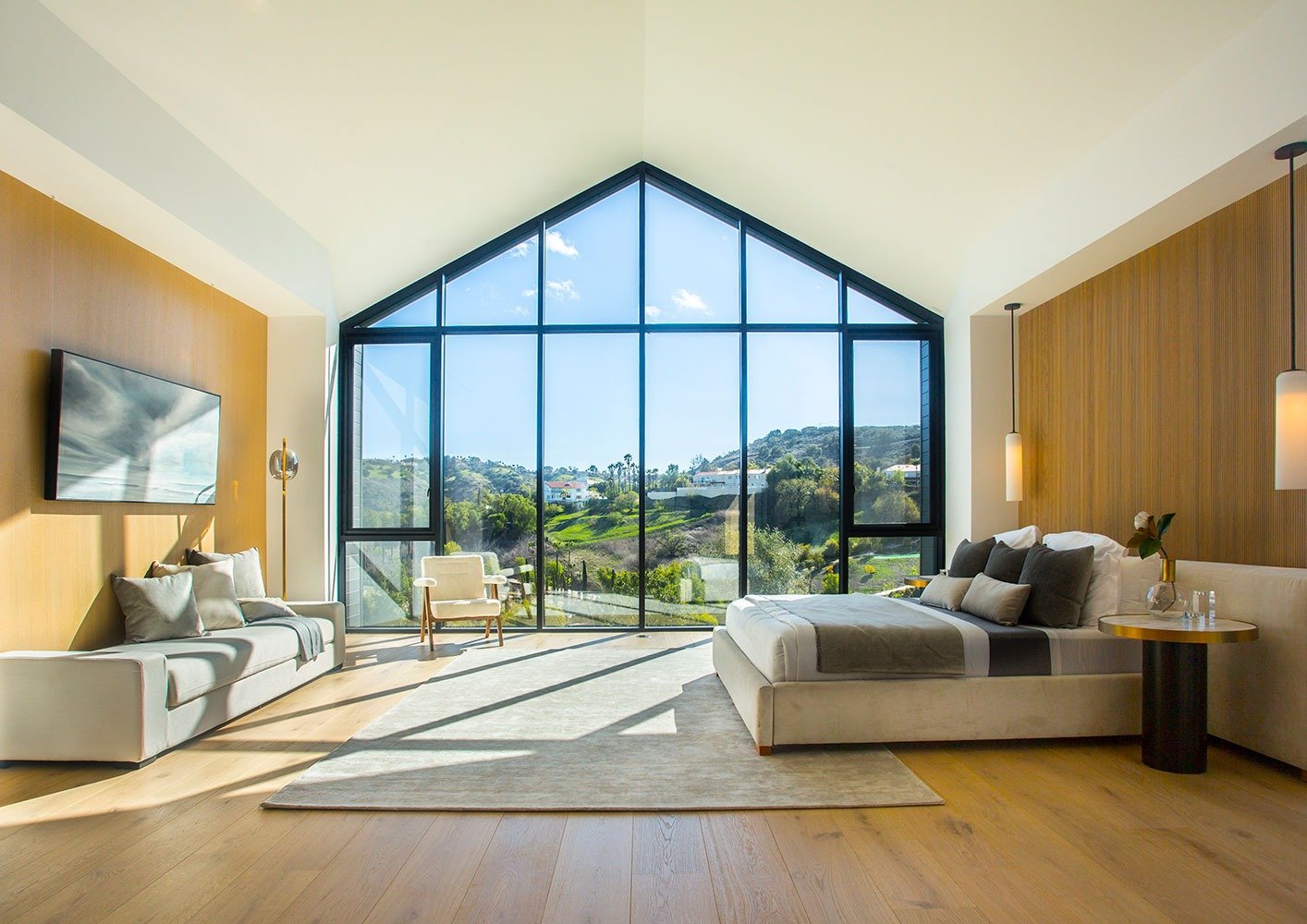 The second floor is accessed via a sleek, sculptural staircase with windows overlooking a courtyard. The upstairs landing leads to a central family room with a view of the foyer below. Surrounding it are the bedrooms, including the huge master suite that has an entire glass wall on one side with a stunning vista of the hills.

It also has its own spacious sitting room and walk-in closet that has plenty of storage space and a massive marble-topped island. Adjacent to the closet is a luxurious bath. See the photo below.

Luxurious Master Bathroom With A View 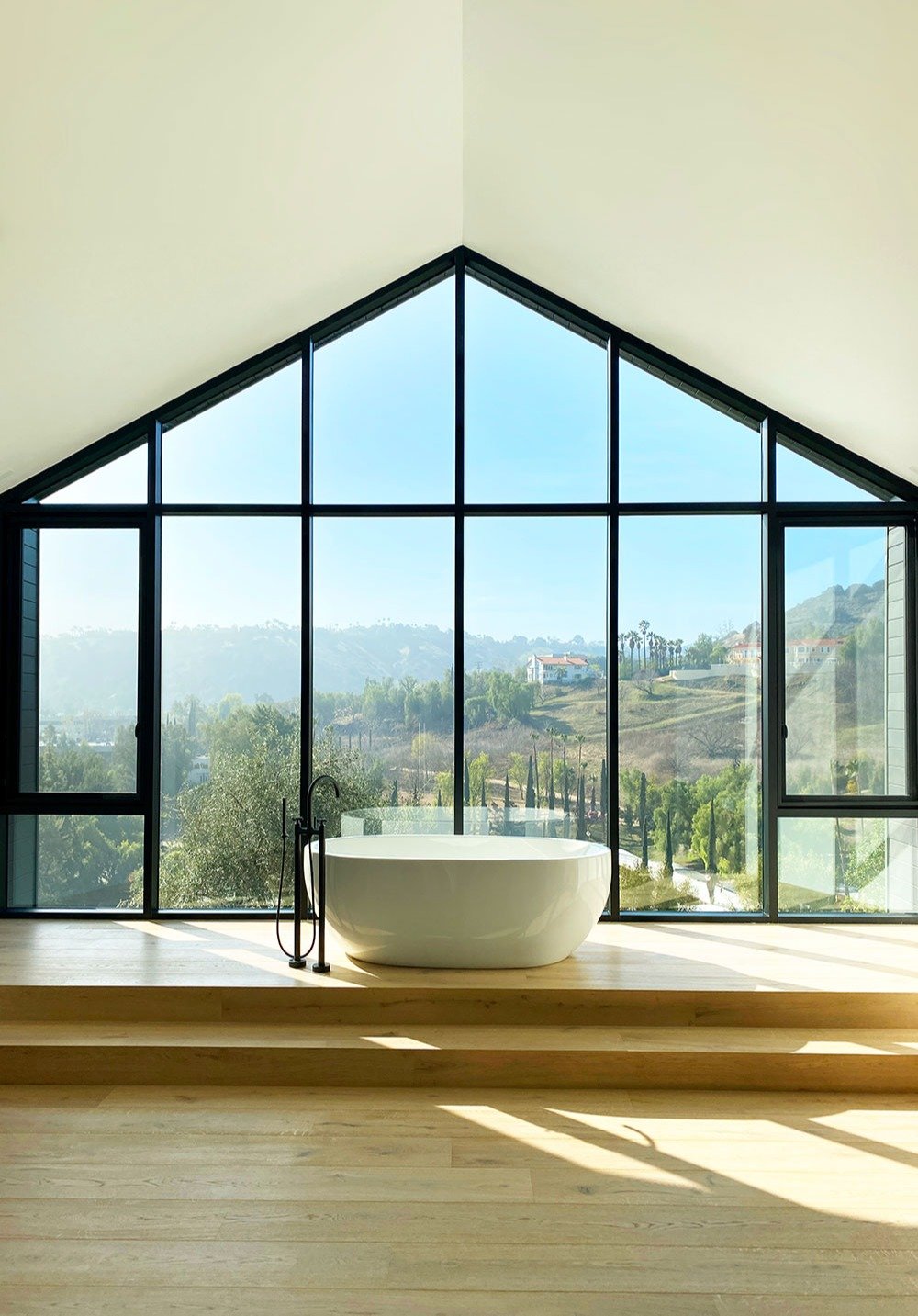 Just like the primary bedroom, the master bathroom features floor-to-ceiling glass windows facing the hills. On an elevated platform right next to the glass is an oval soaking tub – talk about a bath with a view!

The well-thought-out design makes use of these huge windows to bring the outdoors into the indoors. It truly is a modern masterpiece of a house, boasting a unique layout that features five connected structures fanning out towards the west to take full advantage of the beautiful canyon vista, as well as views of the pool area below and the landscaped garden planted with a variety of fruit trees and olives.